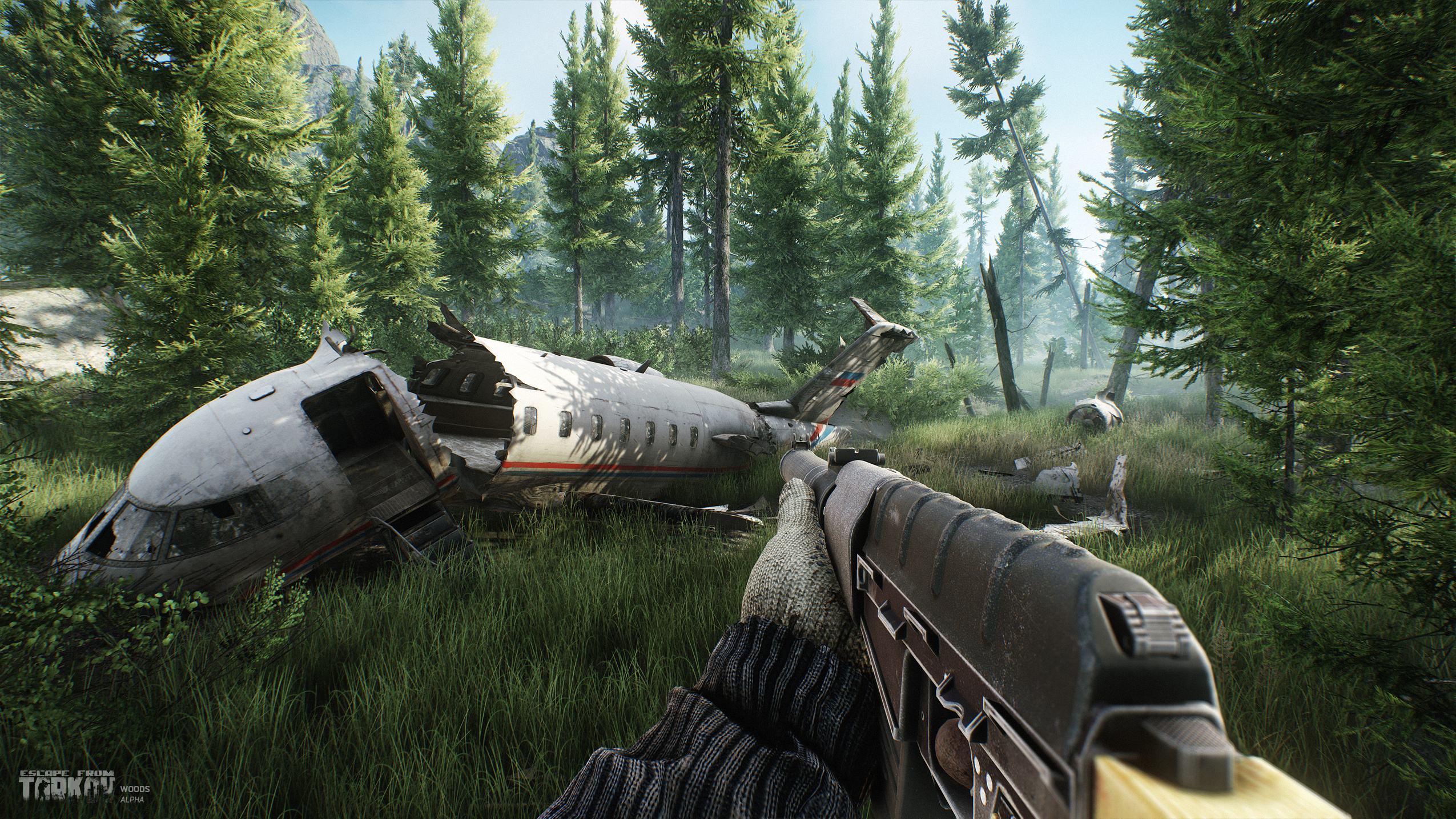 The Tarkov Woods location, also known as the Priozersk Nature Reserve, is a moderately large forested area (hence the name), teeming with hills, cliffs and patches of open terrain, making it ideal for long-range combat (hills and cliffs offer excellent opportunities for snipers, while open fields tend to turn into kill zones). Each raid on the Woods map lasts 45 minutes, with 6 to 12 players and a large number of NPC Scavs.

Woods are considered a map that new players should try to avoid unless they want to complete a specific Escape from Tarkov quest. There are several reasons for this:

There is a lot to explore in the woods of Tarkov: from the abandoned bunkers hidden in the area, through the lumber yard and sawmill, to the crash site of an aircraft and an abandoned tank accidentally parked in its northern parts; here are some of the most interesting places. 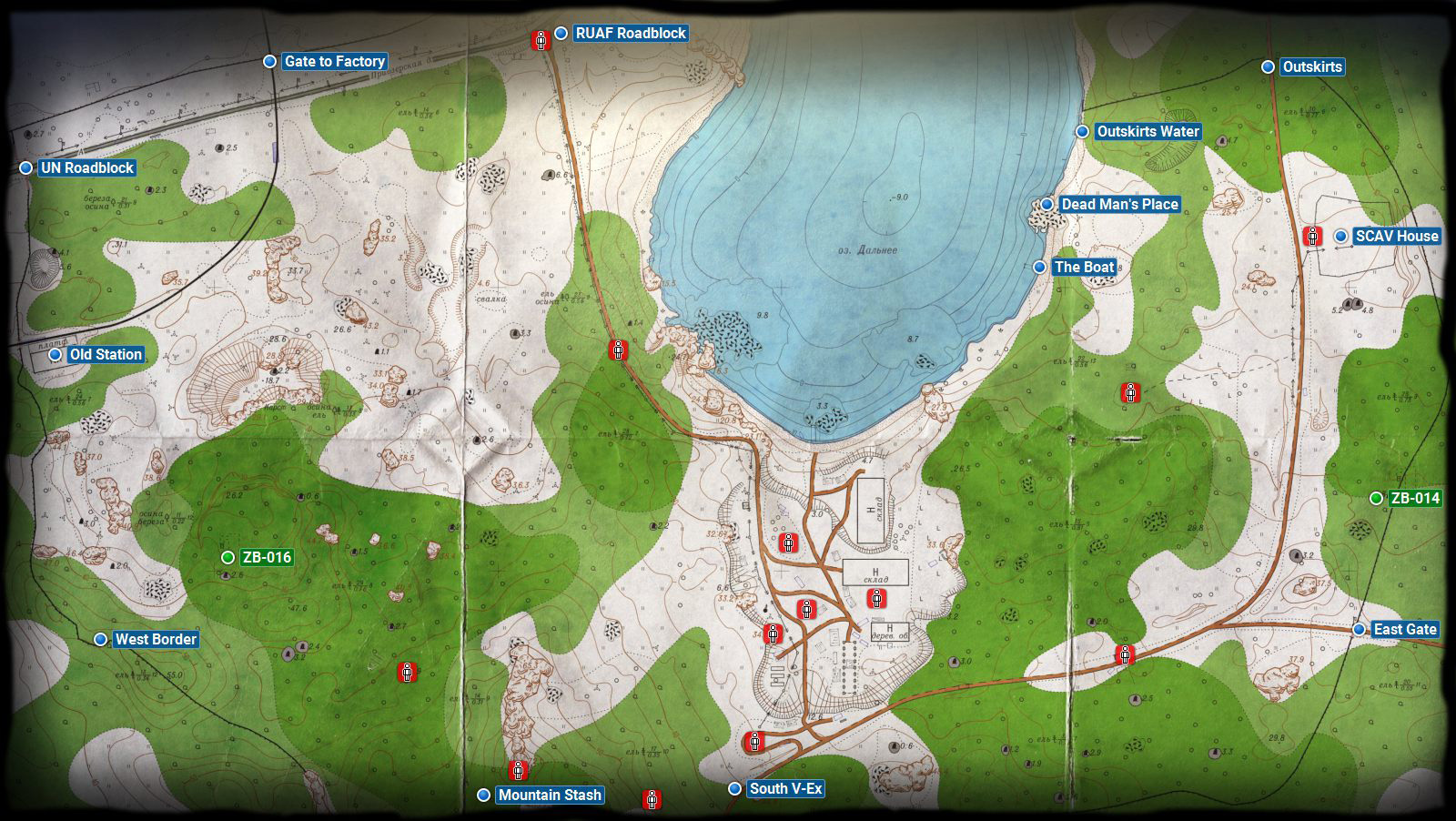 A small bunker hidden in the forest is known by its number – ZB-016. This location serves as an additional PMC mining point (look for green smoke outside the bunker). If a loot point is active, approach it carefully, as someone might ambush it inside (this is a very common practice). The loot point is in the second room of the bunker.

Location – western part of the Woods, northwest of the plane crash site.

The second of the two bunkers is hidden in the woods of Tarkov. This one is called ZB-014 and, like its western counterpart, serves as an additional loot point, but unlike it, the ZB-014 Key is required to unlock. If a mining point is active, there will be a green flash outside the bunker. It is also quite a popular camping site (i.e. ambushes), especially if the loot is open. One of the bunkers offers the best loot, but some of them are hidden behind the castle.

Location – Eastern part of the Tarkov forests, northeast of the Ritual site.

A Russian airliner crashed, most likely shot down during the escalation of the conflict in Tarkov. The area does not offer too much in terms of mining, but serves as a reference point and is one of the most aesthetically pleasing areas in Tarkov Woods.

Note: This is one of the places in Tarkov that screams “Something big in the future!” – we’ll have to wait and see.

Location – Southwest of the Woods, southeast of the Western Bunker and west of the Lookout Rock / Ridge.

One of the most powerful sniper locations on the map. It overlooks much of the western part of the Forest and offers an excellent vantage point against anyone looking to enter the Mill / Timber Depot area located in the center of the Forest. Because of this, you will most likely find a sniper somewhere on these rocks (approaching this area from the south is generally the safest option as players are less likely to look in that direction).

Location – South of the Forest, near the center of the map, east of the plane crash site and southwest of the Mill / Timber Depot area. Lookout Rock.

A large Russian military roadblock (AF stands for Military Forces, RU for Russian Federation), easily recognizable by a tank parked next to it. This location serves as a loot point if you spawn on the other side of the map. This entire area should be approached with caution because there are not too many hiding spots and players often visit this area. Keep in mind that in clear weather, you can shoot from the Sniper Rock on the shore and inside the Woods from the shore east of the checkpoint (and vice versa), which makes it a good sniper spot.

6. Sniper rock on the shore

An inconspicuous rock on the banks of the Woods… if you are shot by a sniper while traveling close to the water, you can be 99.9% sure that the shot came from there. If you want to clear this area, it is advised to arrive from the east or southeast so that the trees cover your approach. The popularity of this camp site is due to the fact that it offers a good view of much of the map (including most of the coast).

Location – In the middle of the map, on the banks of the Woods, northeast of the Timber Depot and north of the Ritual Ring. The sniper rock on the shore is marked as 3 on the map.

The industrial part of the Tarkov Woods, which has a sawmill, a timber / plank warehouse, work shacks and just a warehouse. It is by far the most popular spot on the map, not only because it sits in the middle, but also because it contains the most spawns and the boss of the map (Navigator; dead PMCs are often a good indicator of his presence as he is a good sniper and often easily kills untrained players) appears nearby, patrolling the common area with two of his bodyguards (he appears approximately 1 time in 3 raids).

Location – Blind spot on the forest map, east of the western bunker and west of the eastern bunker, southwest of Sniper Rock on the shore (unmissable area).

Another favorite spot for EFT snipers and campers. It offers a good view of the surrounding area and spans the southern approach to the Woods Depot, making it very popular with “less active” players (however, it requires a fairly high durability).

Location – South of the Timber Depot and southwest of the Ritual Ring.

9. Place of the ritual

A place used by a local sect for occult rituals. The circle is where the Cult makes its sacrifices (which consist of weapons, often high-end ones). This is one of the locations of the Cult – Part 2 quest and one of the most mysterious areas of Tarkov.

Location – Central Forest, east of the Timber Depot and northeast of the southern checkpoint.

Escape from Tarkov is a very difficult, even hardcore game, and there is no sensible training in the gameplay. Therefore, we decided to create a guide and a series of guides that will help new players to better navigate the maps.

If you want to go to the Woods, then you will definitely need good equipment and powerful weapons. You can get all this at a very competitive price on the boostingexperts.com. We provide our customers with a large assortment and quality service. See for yourself personally. Our online chat is always open for your orders.